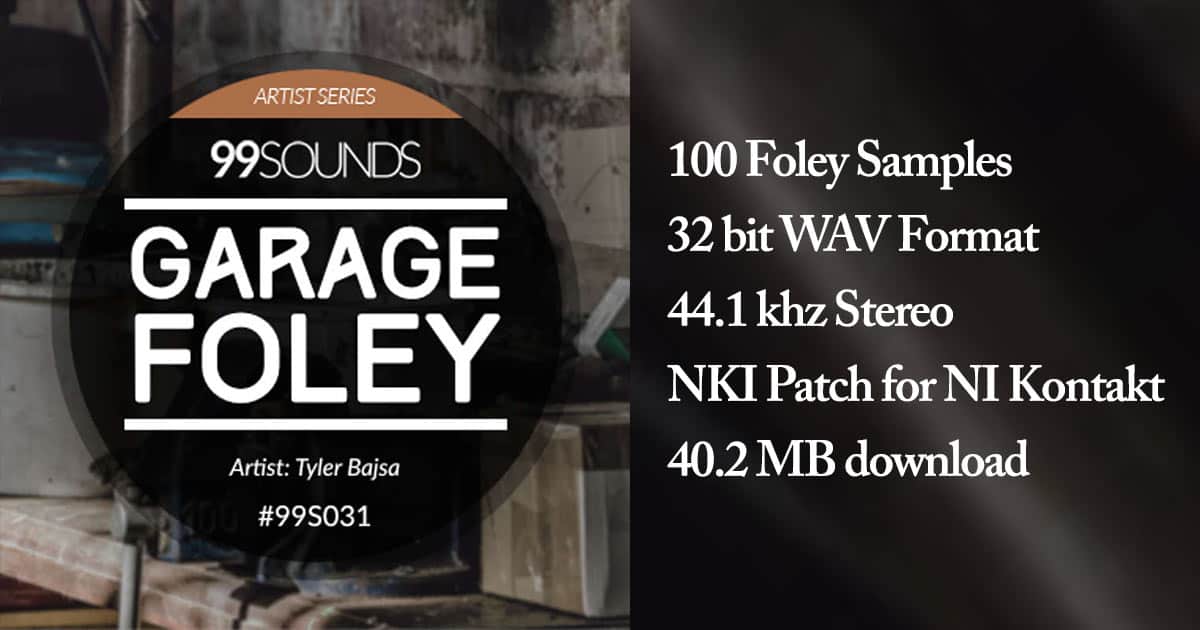 99Sounds is proud to release Garage Foley, a collection of royalty-free percussion hits and foley sound effects crafted by sound designer Tyler Bajsa. The sound library was created from field recordings that were captured in a garage, with minimal additional processing applied. These are, for the most part, recordings of various objects and tools being hit, with audible natural reverb in the background.

If you’re a fan of The Warehouse collection which was expertly crafted by Richard Gould, this new release will be right up your alley. Garage Foley is less focused on delivering horror-inspired sounds and spooky sound effects, but it shares a similar grungy aesthetic and raw feel. Unlike the majority of our recent releases which contained purely synthesized sounds, Tyler Bajsa’s pack consists solely out of natural sounds that were captured in the field. Here is what Tyler had to say about the recording and editing process for Garage Foley:

“I originally planned on simply hitting 100 things in my garage and calling it good. But after listening to the raw recordings, I knew they had to be processed, at least a bit. My goal was to process these raw sounds as little as possible so that they still sound raw and authentic. I achieved this with minimal normalization, which is why some samples are louder than others. The tails/release times were also reduced slightly. No equalizing, filtering or any other effects were added. I used my Zoom H1 audio recorder (blue of course) for all of the samples. The H1 was mounted on a tripod which I set upon rubber pads to reduce vibrations from the surroundings.”

Percussive foley sounds like these are perfect for building organic sounding rhythms and layering over existing drum tracks, such as the ones in our free 99 Drum Samples collection. The included NKI patch for Kontakt 5 conveniently maps all the samples across the keyboard, allowing you to load it in your DAW and start jamming right away. The samples can also be used as background sound effects in audio and video projects or used as the sound source for your own sound design endeavors.